Zeba and her pups 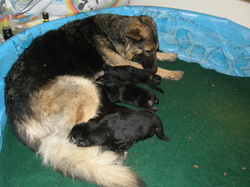 "He who hesitates is lost"

The proud new owner of this puppy is Brett Ingenito of Clarksville, TN.  Brett had a hard time making a decision between this puppy and the purple collar puppy so he purchased both puppies.  They both had their own unique qualities and he felt the sisters would be happier if they stayed together.
This long coat girl is the blackest of them all.  She is more interested in you than playing with her sister.  She is a wonderful pup, loves attention, being in the house and brushed.

The proud new owner is Brett Ingentio of Clarksville, TN

Words and pics from the new owner:

_Hey Nancy,Have no fear she is no longer black collar puppy. I have named her Scout. The week of Christmas she took her first long road trip to my home up to Lexington and northern Kentucky. She did a great job to and from. Here are some pictures from the trip and this past weekend. Scout has received all of her vaccines and will be starting her puppy obedience class this Saturday. We took Scout and Marta to the big dog park (Shelby Farms) this past Saturday. It was her first time going to the actual dog park (we have been on the bike trails for walks). The dog park covers several acres and has a few deep ponds you can fish in as well. Marta and Scout were playing with a yellow lab. The yellow lab jumped in the water. The next thing we know Scout dives in and comes right back out. We were surprised, but glad she is adventurous. After another 30 minutes went by Scout thought she would give the water another shot. She jumped in and started swimming in circles. My boyfriend and I started running over towards thinking we would have to jump in after her. Finally, her instincts kicked in and she same to the opposite side (about 20 feet). She gave us a good laugh, but I think we will have her wait on big swims until she gains more weight and muscle.  Hope you enjoy,Kimberly

_Hey Jim and Nancy! I wanted to give you an update on lil Scout. She is doing really well. The puppy class has eight other pups and helps with her socialization. Every Saturday we go to Pets-mart for an hour of socializing with families especially kids. She had her paws full this past Saturday. But she does very well with kids.  She had her first day of doggie day care. Once she was home she fell asleep and didn't wake until the next morning. She will be going just once a week for socialization. We also go to Shelby Farms dog park twice a week for socialization. She has recently started barking at a few specific dogs (mostly large dominant dogs), runs towards them, and once she gets to them she runs back to me. This started about two weeks ago and we are working on that issue.  She is growing very fast as you can tell. She can no longer walk under Marta, but still tries. Hope you guys are doing well,Kimberly, Marta, and lil' Scout

Blue collar male puppy.  This is my only male in the litter.
SOLD to Crystal Depriest of West Virginia

SOLD TO:   Clydetta Botchway of Redbay, AL  Her new name is Eve.