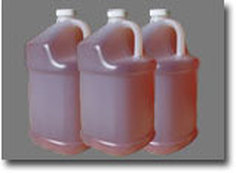 Epic II CL has natural vitamins, acids, enzymes and glyco components with a water base consistent.

The enzymes in Epic II CL plays multiple roles in the breakdown of plant and animal feedstuffs.   By adding Epic II CL to your animal's feed you are providing enzymes which releases previously unavailable starches, lignins, proteins and minerals allowing the animal to use these formerly missing nutrients to fortify its complex immune system.

Over all your animal's will feel better and be more active.

Gomer's Inc. is the Creator of these Awesome Karbo Products.

Many pathogenic bacteria, viruses, protozoa, fungi and toxins in the GI tract, and the whole body, are attracted to and attach themselves to the mannan sugars. Once attached to the sugars, or oligosaccharides, they become inactive, cannot colonize, and are rafted out of the body.

In addition to the above, Karbo Flour contains natural diatomaceous earth, calcium carbonate (CaCo3), calcium oxide (CaO), zinc oxide (ZnO), citrus bioflavins, and encapsulated enzymes. The above combination of natural ingredients has proven to be very beneficial in stimulating the immune system and providing a healthy gut to ward off attacks by bacteria, viruses, protozoa, fungi and aflotoxins.

The addition of the proteolytic enzyme CL fortifies the Karbo Flour formula to bind ammonia released during protein and amino acid breakdown. High ammonia levels are toxic to bacteria necessary for complete digestion. The ammonia binding by the CL enzymatic fraction is reversible, and the ammonia release takes place when the level of ammonia present drops to a constant level.